The following changes will be in place after the Sept 28th (Tue) update.

🌊 Addition of a New Legend 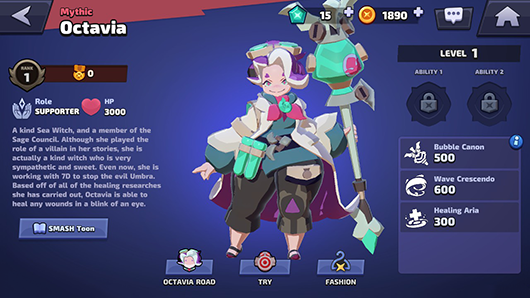 🌊 Introduction of Octavia:  Octavia is a supporter who strengthens her team, increasing allies' survivability.

She can help allies with powerful heals.

A kind Sea Witch and a member of the Sage Council.

Although she played the role of a villain in her stories, she is actually a kind witch who is very sympathetic and sweet.

: Swing the staff twice to attack the foes in front, then steps back while firing 2 water bombs to deal damage.

Swings the staff down to deal damage when used as Aerial Skill.

: Slam the staff into the ground to summon waves.
The summoned waves grow bigger over time, and disappears after dealing damage.
The water will quickly protect Octavia and explode to deal damage when used as Aerial Skill.

: Throws a massive bubble. The bubble explodes upon hitting the ground to deal damage.
It also creates a healing area which lasts for 4 seconds and heals allies in the area for a certain amount of HP.

🌊 Octavia Abilities (Based on Level 1)

: Increases Basic Attack damage by 30% when both Ultimate and Skill are not available.

: Increases base Movement Speed by 6%, and decreases Skill cooldown by 0.1s
whenever a Ground Attack hits an opposing Legend.

: Adds the ability to heal 5% HP for allies upon using Aerial Skills.

: Adds the ability to damage opposing Legends inside the Ultimate area by 190 per s.

🌊 How to Obtain Octavia

- Once you purchase the SMASH Pass Season 7, you can obtain the Legend, Octavia, as the paid 15th reward.

- Once the SMASH Pass Season 7 ends, Octavia can be obtained from Gold Box or higher grade.

- Once the SMASH Pass Season 7 ends, Octavia can be obtained from Special Box or Super Special Box in the Shop.

■ Addition of a New Event

- Legend Mission Event will begin after the update.

: Clear the assigned mission to obtain Legend Coins that can be exchanged for rewards of your choice!

: Please refer to the event notice for more information.

* The date and details are subject to change due to internal circumstances.

: When you enter the SMASH Pass screen for the first time, the new season notification page will be displayed.

: Upon clicking the SMASH Toon button in the SMASH Pass window, it will lead you to this season's Pass Toon page.

: New Legend, Octavia, can be unlocked when you purchase the SMASH Pass and reach the 15th stage in the paid pass track.

- Once you purchase this season's SMASH Pass, you will get the following benefits.

: Octavia is available when you reach the 15th stage.

: During the SMASH Pass Season 7, the quest limit is increased from 6 to 9. 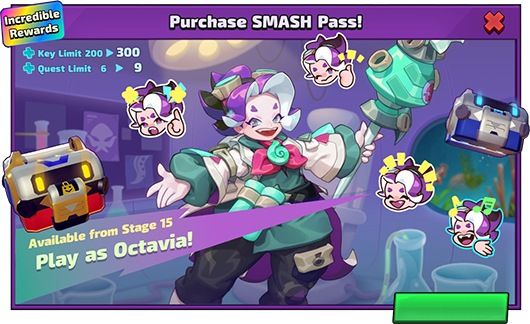 - At the Dream Shop, two Legends, Cindy and Witch Queen, are added.

* If you already own these Legends, they will not be displayed.

- Kaiser skin and Alice skin have been added to the Dream Shop. 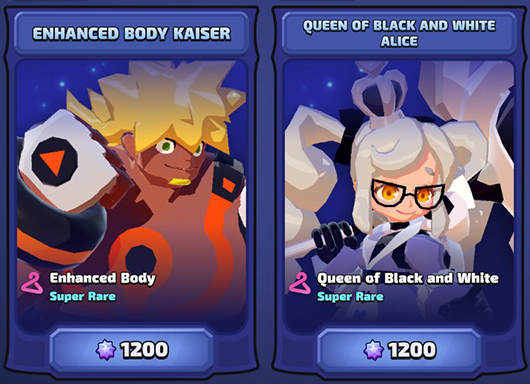 * Please be informed that the above skins are available to purchase even if you don't own the respective Legends.

- Peter Emoji Box and Red Emoji Box have been added to the Dream Shop. 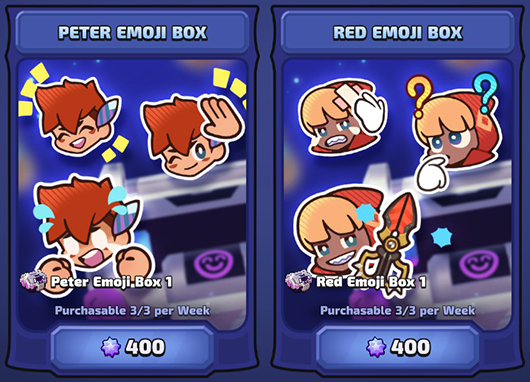 - After the update, new packages will appear at the shop depending on the period.

* If you don't have the Legend, Hook, the package will not appear.

- When you equip a skin, you may check the respective skin description that is located on the left of the screen.

: Find out the fascinating story behind each Legend's skin.

- Keep your account safe by connecting it, and get the reward.

: In the shop, the Pirate Successor Peter Skin will be available to claim.

: If you already own the skin from the pre-registration reward, you will get 120 gems.

* When you tap the [Get Reward] button after connecting the account, the reward will be acquired immediately. (The reward will not be sent to the mailbox.)

- Based on the number of medals for each Legend, the reset amount and rewards will vary.

(For those who have already obtained the profile icon from the previous season reset, you will not receive a new one.)

- The 6th Season will begin.

: After medal reset, Legend Roads and Medal Roads will display your current number of reset medals.

: The highest medal record you reached previously will be displayed in Legend Roads and Medal Roads.

[Changes in all Legends]

- After the update, Legends will not be able to change direction during get-up attacks.

- Some of the Legends' Ground Attacks allow targeted foes to run away as the stun did not last long enough.

Therefore we have slightly increased the following Legends' stun skill.

: Ground Attacks' stun duration has been increased for Ducky form, Ravi, and Wolfgang.

- We have slightly readjusted the attack direction to better target the foes when attacking from the air out of the map.

When you attack without moving, the attack direction will be toward the foe.

While moving, the attack will be toward your designated moving direction.

: Legends we have removed the auto-correction of attack direction.

: Legends we have added the auto-correction of attack direction.

Even when they are up high, they can easily leap down to the ground. Master Cat should do the same.

: Delay after landing (before initiating attacks) is slightly decreased.

: When Rapunzel uses Ultimate up in the air, projectiles float in the air and fly away,

which makes using Ultimate in the air inefficient.

Also, it is not easy to figure out the status of the projectiles. As a result, we have adjusted the Ultimate to be more useful.

: Projectiles will now move around the nearest ground.

: Since her number of attacks has been reduced, and there have been comments about Red's movement being awkward.

Therefore, we have adjusted Red's animations to match her movement, which would slightly reduce her movement range.

: Her movement range during the attack is reduced.

We have made Robin's get-up attacks to be similar to other Legends accordingly.

: Knockback direction has been corrected.

- Magnet Bomb has been improved.

: The longer the Legend is exposed to the oven's heat, the higher the heat damage will be.

: When the Legend is in invincible status, the Legend will not get any damage.

: If the Legend is not damaged by oven heat for a certain period or is out of the oven heat area, the increase rate in heat damage will reset.

- After the update, all Event Arenas will be available to play.

- Removed the type name displayed in front of the name of fashion item effects.

- The sorting order of the quest list in SMASH Pass has been improved.

① Quests that you can clear

- The maximum number of friends you can add has been increased.

- Loading speed when you enter the matches has been improved.

- Fixed an issue where the color of the arena description texts appears different in AOS compared to iOS and Steam.

- Fixed an issue where the image of the event page appears broken on PC.

- Fixed an issue where unacquired frames in the profile icon preview screen appear bright as if they have been acquired.

after you view another player's profile pop-up and use the back button to go back to the battle log screen.

- Fixed an issue where a number “1” next to the [New Arena] button does not disappear even after opening all available arenas.

- Fixed the incorrect animation that appeared when acquiring Puzzle Piece from the Super Special Box.

- Improved an issue where the lobby screen intermittently appears black, and Legends or texts are not displayed properly.