The following changes will be in place after the September 14th (Tue) update.

■ Addition of a New Mode

- A new mode, Duo Deathmatch, has been added.

- The rotation order for the event Arena after the update is as follows.

A trunk in quiet skies that is designed elegantly for those on a long journey.

Mysterious magic magnets that are known for attracting people are in that trunk. So, be sure to make the best of it!

: It is a 2v2 team battle, and seven score fields are displayed at the start of the game.

: If you SMASH the opposing team player, you get 1 point, and the first team to earn 10 points wins.

: Team up with your friend and enjoy fun duo mode.

: Don't miss out on a chance to SMASH opposing team with the Magnet Bomb.

: Just like the bomb, Magnet Bomb will be equipped automatically when you acquire it. You may use it by throwing it to the enemy.

: Magnet Bomb pulls targeted foes toward where it was thrown.

: However, if there is any block, targeted Legend may not get pulled toward the designated location.

: Targeted foes will be stunned for a certain amount of time.

- Two Legends, Hook & Ducky and Swan, are added at the Dream Shop. 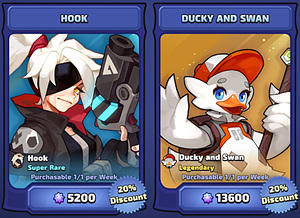 * If you already own these Legends, they will not be displayed.

- Don Quixote skin and Red skin have been added to the Dream Shop. 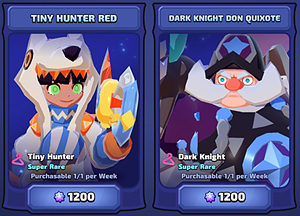 * Those skins will only be available when you have the respective Legends.

(*Sep 14th 09:20 added - Please be informed that above skins are available to purchase even if you don't have those respective Legends.)

- Flare Emoji Box and Ravi Emoji Box have been added to the Dream Shop. 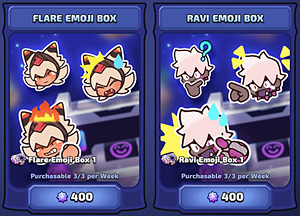 - After the update, new packages will appear in the Shop depending on the period.

: Red can take the lead and do a surprise attack with her stealth ability.

However, due to the long ground attack duration, a foe attacked by Red may feel helpless.

By nerfing ground attacks, we intended to reduce the stress of the targeted foes.

: The number of attacks is reduced from 8 to 6. (Total damage amount stays the same.)

: Improved Red to hang on the cliff when she falls out of the map while using her basic attacks.

- Regular Arena slots are now under the Standard Arena tab.

: Standard Arena tab will be displayed above the Arena slots.

- Event Arena that was only available during the weekends is now available to play every day.

: You do not gain or lose medals in Event Arena, but you may still acquire keys as rewards.

:  Weekend Arena slots are now under the Event Arena tab.

: Event Arena tab will be displayed above the Arena slots.

- The text colors of maps of each Arena mode are now the same.

- Added a vibration effect when hitting items such as Candy Bags in Battle Royale or Mandrakes in Harvest/Harvest War.

- Matchmaking has been improved.

: Players below a certain number of medals will no longer be matched with high-medal players.

- Players now can preview what kind of items they can acquire in the Show Rates pop-up.

: For items (skin, emoji, and fashion item) that can be previewed will show the [i] button on the left of Show Rates pop-up.

Tap the Preview button to see the image of the item.

- Changed type of predefined messages and the order in chat. 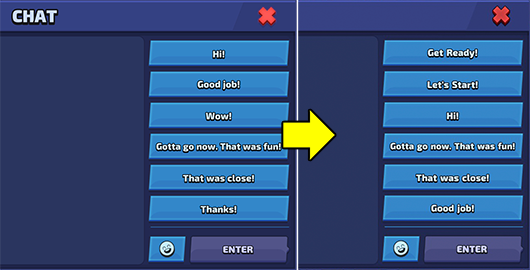 - Friends/team member status in the friends/lobby screen will now be shown in detail.

- The team/player code is no longer case-sensitive. Also, even if there is a space before or after a letter, it will still be entered accordingly.

- Improvement has been made to focus on the currently selected Legend when entering the Legend list screen.

- Sound effects have been added to the Super Rare Emoji that did not have a sound.

- Improved to support an in-game controller.

* The controller only works while controlling Legends.

* Change Custom Keybinds are not implemented. Other controllers are not supported.

: Fixed an issue where hitting a foe with the edge of the first ground attack gives only a small amount of damage.

: Fixed an issue that causes a sudden change of direction when you controlled a direction while charging up the 1st stage of Robin’s Skill.

- Fixed an issue where Ultimate cooldown information was incorrectly displayed.

* No changes were made in Legends’ abilities. We have only corrected the text.

- Fixed an issue where players were forced back to the main menu during matchmaking.

- Fixed an issue that occurred in the battle result screen when exiting the match while spectating the Battle Royale match.

when joining a team with a team invitation in Custom Match.

- Custom Match or Battle Log pop-up will now close when you tap other areas in the screen.