The following changes will be in place after the July 20th (Tue) update.

🐺Addition of a New Legend 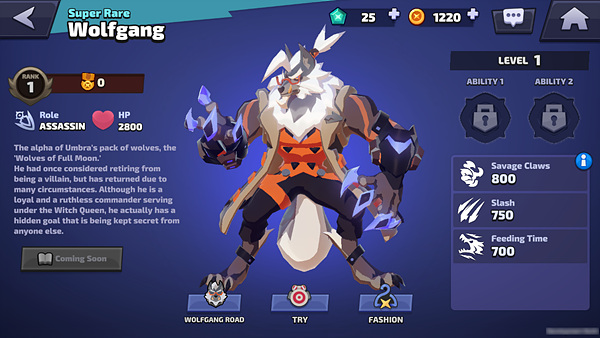 He is able to survive in dire situations while slowing down foes.

This feature makes him a good assassin as he could easily track down foes.

Wolfgang is the alpha of Umbra's pack of wolves, the 'Wolves of Full Moon.' and a loyal commander serving under the Witch Queen.

Swipes vertically instead when used as Aerial Skill, dealing damage.

Decreases Movement Speed of hit foes by 35% for few seconds.

Chomps down a foe, dealing damage.

Restores 25% of Max HP upon smashing a foe with Ultimate.

🐺 Wolfgang Abilities (Based on Level 1)

Increases the duration of Movement Speed decrease effect on foes hit by Ground Skill by 1 s.

3) No More Hide and Seek

Increases Basic Attack damage by 12% for 3s after successfully hitting Skill against a foe.

Increases damage of all attacks by 8% after smashing or causing a foe to ring out. This effect lasts until death.

🐺 How to Obtain Wolfgang

- Once you purchase the SMASH Pass Season 5, you can obtain the Legend, Wolfgang, as the 15th reward.

- Once the SMASH Pass Season 5 ends, Wolfgang can be obtained from Bronze Box and higher grade.

- Once the SMASH Pass Season 5 ends, Wolfgang can be obtained from Special Box and Super Special Box in the Shop.

■ Addition of a New Map

- After the new map addition, Arena takes turn as below.

Darkness has fallen upon the giant chessboard.

Enjoy the even more exciting Crown Guard match on top of a night-fallen chessboard,

under the gazes of the White Queen and the Crimson Queen.

: The new map, Queen's Chessboard - Late Night, is the same concept as the Crown Guard.

: It has the same rule as the Crown Guard mode, but the space is narrower than the existing map.

This means there can be more fierce battles around the king.

: SMASH foes with the crown to get victory!

■ Addition of a New Event

- Play Time Event will be held after the update.

: Based on your playtime you will be given event tickets that can be exchanged for various rewards. 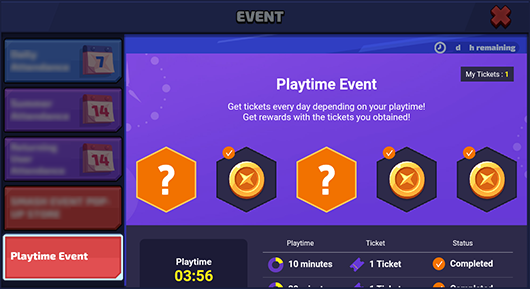 : Upon clicking the SMASH Toon button in the SMASH Pass window, it will lead you to this season’s Pass Toon page.

: New Legend, Wolfgang, can be unlocked when you purchase the SMASH Pass and reach the 15th stage in the paid pass track.

- Once you purchase this season’s SMASH Pass, you will get the following benefits.

: Wolfgang is available when you reach the 15th stage.

: During the SMASH Pass Season 5, the Quest Limit is increased from 6 to 9. 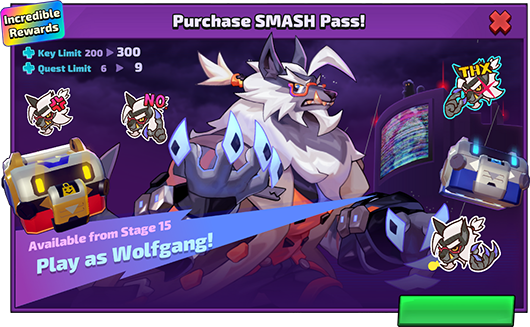 - At the Dream Shop, two Legends, Cindy and Flare, are added.

: From August 10th to August 19th, Flare is available to purchase with 7,200 Dream Pieces.

: If you already own those Legends, those items will not be displayed.

- At the Dream Shop, Hook Emoji Box has been added.

: From August 10th to August 17th, Dream Emoji Box is available to purchase with 400 Dream Pieces.

- After the update, new packages will appear at the Shop depending on the period.

(Detective Master Cat Skin and 1 x Special Box can be purchased with 170 gems. Additionally, it comes with 4 x Special Box.)

(If you do not own Master Cat, the package will not be displayed.) 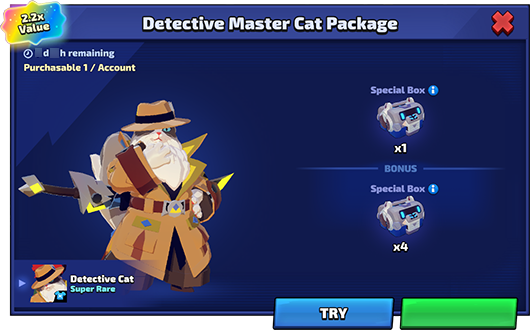 - Added animation effects to some of the profile icons.

- Each emoji now has its own name.

: You may check the names in SMASH Pass, Legend Road, and others.

- Based on the number of medals for each Legend, the reset amount and rewards will change.

* For those who have obtained the profile icon with the previous season reset, you will not receive a new one. 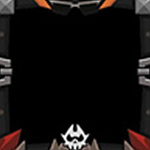 - Fourth Season will be started.

: After medal reset, Legend Roads and Medal Roads will display your current number of reset medals.

: The highest medal record you reached previously will be displayed in Legend roads and Medal Roads.

Cindy is a versatile Legend who performs well in all modes.

However, Cindy is too powerful than other Legends in Battle Royale as she could grow way faster with her cooldown reset skill.

To slow down her growth speed in Battle Royale, we have removed the cooldown reset skill effect on Candy Bags.

: It will no longer refund Skill cooldown upon hitting Candy Bags in Battle Royale.

It is by design to have weak Ducky and powerful Swan, but it was too difficult to deal with the Legend due to Swan's strong attack and mobility.

Therefore, we have made her attack less powerful.

: Attack range of the third attack gets slightly increased.

: After landing, the delay is increased.

: With the last changes made, the negative experience with Hook has decreased a lot.

However, as Hook's attack has been reduced, it made Hook difficult to do her part in the Arena.

Therefore, we have increased Hook's attack and adjusted so that Hook can seize the attack opportunity easily.

Master Cat is performing well in Dual mode. However, he struggles a little when dealing with multiple foes.

Now we have eased the pressure on using the Ultimate so that he could do his part in team play modes.

: Delay after an attack is reduced.

: Fighting against Nui can sometimes be an unpleasant experience.

For those Legends who are not able to attack fast, it is difficult to fight against Nui due to her wide attack range.

Therefore, we have reduced some of her attacks.

(*Not only the first attack, Nui's Ground Attacks have also been reduced overall.)

: Cooldown refunds upon hitting a foe will be slightly increased.

: Increases the time it takes to hit a foe within the Skill range.

: Significantly shortens the falling time of rays from the air.

: The knockback direction is now aligned.

: Due to the increase in landing delay, it was difficult to keep foes in check with the Aerial attack.

Now, we have eased the pressure on jumping by decreasing landing delay which enables Rapunzel to perform well against foes on the ground.

- When the Legend falls from the jump stand, the falling animation effect has been improved.

- Ability information can now be displayed even when Legend’s level has not reached Level 5.

- Purchase confirmation pop-up upon tapping a package at the Shop is improved.

- Cooldown drinks have been added in Legend Try mode.

- Added UI that indicates how much HP has been regained when players restore HP by potions or abilities.

- Upon tapping a player in the Ranking board, a player will now be directed to the selected player's profile.

- The font applied to the Japanese version will be changed to Osaka.

- The overall currency icons have been changed.

- The remaining time display in the SMASH Pass has been changed.

- During the tutorial of Battle Royale mode, a guide for the hidden identity system has been added.

- The cooldown status will now be displayed in the UI when you are in a cooldown state due to the frequent use of emojis in the arena.

- Emoji display location will now be adjusted depending on the size of a Legend in the Arena.

- Fixed an issue where Kaiser's Ultimate energy charge is not consumed in certain circumstances.

- Fixed an issue where Master Cat's Ultimate icon was abnormally displayed when hanging on the edge is finished.

- Fixed an issue that intermittently causes Master Cat to be up in the air when he hits an object using his Skill.

- Fixed an issue where Alice intermittently floats in the air during her first ground attack.

- Fixed an issue where Cindy's stun duration was not consistent when she hits a foe using the ground skill.

- Fixed an issue where Nui slips while using the ground skill.

- Fixed an issue where the introduction of some Legends was displayed incorrectly in certain languages.

- Fixed an issue related to the MVP scene that appears after a Battle Royale match.

- Improved the issue where some Legends intermittently survive by bouncing off the walls even after being Smashed.

- Fixed an issue that triggered vibration in non-damage hits.

- Fixed an issue where SMASH LEGENDS app was displayed vertically.

- Fixed an issue where the effect was not displayed upon leveling up a Legend.

- Fixed an issue where the number of Dream Pieces was cut off in the Season medal rewards pop-up.

- Fixed an issue where notification was not displayed in the Fashion button in Legend's detail window even after obtaining fashion item for the first time.

- Fixed an issue where the application slows down when loading the Friends/Team screen for players who have a large number of friends.

- Fixed an issue where the chat input window blocked the chat screen in the PC version.

- Fixed an issue where the panel closes when players drag the emoji to the chat window.

The above contents are subject to change due to unexpected issues.